Our Neutering Manager tells us what he does in his job for Cats Protection.

Neutering Manager, Ian MacFarlaine tells us about his role at Cats Protection

Now and again a few weeks roll by which are truly crazy and this has just been the case for me as Cats Protection’s Neutering Manager. We ended June with glorious sunshine and are now in late July and soaked in torrential rain. 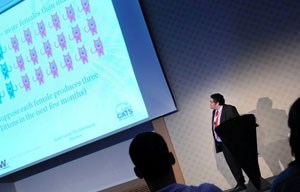 Sometimes it feels like I am more of a teacher than a neutering manager! During June and July though, I thoroughly enjoyed providing training sessions for overseas animal welfare workers in London, European vets in Austria, and volunteers and staff within CP too, and hundreds of CP volunteers will have given up even more of their own time to come along to training sessions in Reading, Coventry, Grimsby and here at the NCC. Providing guidance and education on the neutering and care of feral cats, both within and outside CP, is a really important part of my role, as this group of cats is one of the most vulnerable to mishandling and stress.

Shortly into July we finalised our total of cats neutered in 2010 with CP’s help. Last year, in the face of huge challenges (such as the impact of VAT rises), and an increased demand on our neutering service as more people are in financial difficulty, we increased our total to 176,366 cats – almost 14,000 more than 2009. This is a real tribute to the hard work of our volunteers and our staff right across the charity, in increasing this total despite the odds. We’re not letting the grass grow under our feet in 2011, with more than 92,000 cats having been neutered by mid-July. Our neutering is a real team effort, and as well as getting out and about to plan a future neutering drive in Stoke On Trent, I also took advantage of the sunshine to visit some of the other charities who help us deliver our neutering work, in Mid-Wales, Birmingham, Staffordshire, and Lancashire.

Our small Neutering Support Team at the NCC rarely get the chance for long meetings as they are occupied in responding to around 170 calls and emails from cat owners and neutering scheme partners every day. We got a rare chance to switch the phones off for a few hours so that we could have a think about what we could do better in the way we respond to our customers. We have an amazing staff team working on neutering at the NCC, and in field, and our day was really productive. The following day at our AGM I was even more overwhelmed by the progress many of our volunteers have made in persuading their vets to neuter cats early, really hitting home the prevention aspect of our Neutering programme.

And away from work? Well I got the chance to see my favourite band in Camden, who rarely visit the UK these days. Not only that, but I got to meet some of them (and a few other celebs) afterwards…. and while we were there took the opportunity to persuade them to support CP by contributing to our Celebrity Paws auction later this year. I don’t think they thought I was too strange! So don’t forget to check out the CP website for details of all our fundraising activities.