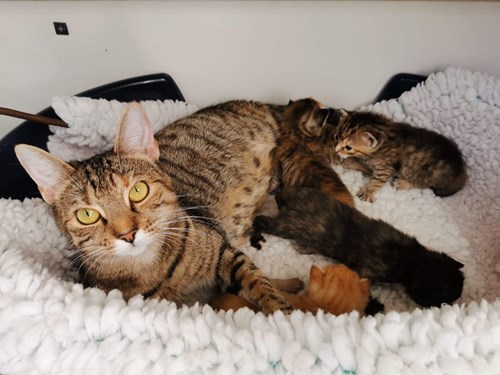 Emily Bronte and her kittens Catherine, Eliza, Celine and Isabella

Literary luminaries including A-cat-tha Christie, Margaret Cat-wood and Moggie O’Farrell are all being considered as purrfect candidates to be honoured with cats named after them.

The initiative is the brainchild of the centre's Deputy Manager Stacey Ely, after she noticed that cats across the charity seemed to enjoy a good book. During lockdown, our Haslemere Adoption Centre hosted regular bedtime stories with cats in their care on YouTube.

To kick off, the team opted for Emily Bronte, Jane Austen and Agatha Christie as their first felines with literary namechecks.

Not that they are literary snobs; these cultured cats won’t turn up their noses to a bit of Cat-erine Cookson or Cat-lin Moran if they’re in the mood for a reading. 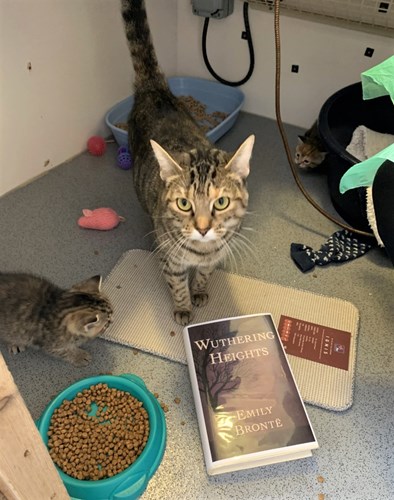 Emily Bronte with a book written by her namesake

For the team who have spent the past year caring for cats while under lockdown measures, a little light-hearted inspiration was easy to come by.

Lindsay Tempest, Downham Market Adoption Centre Manager, said: “Every year, we're challenged to come up with thousands of names for the cats in our care, so as this is our 30th anniversary, we thought we should go all out. That’s when we decided to celebrate fabulous females of the past. For March, it is world class authors.

“We have an amazing team of clever, hard-working and strong women working at the centre, so it seemed a great way to celebrate our achievements, with a nod to fabulous females of the past.”

Jane Austen was first to be named by the team; a young stray cat found in a rural area and taken in by a family who contacted the centre for help. 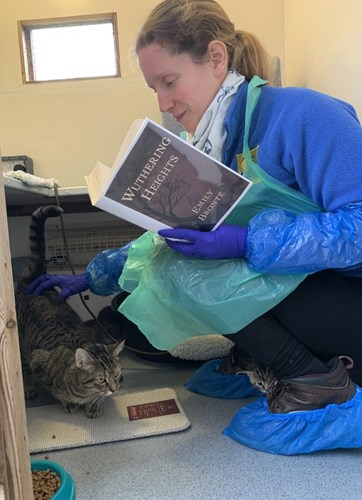 Then there was Emily Bronte, an 18-month-old tabby girl who came from an owner who could no longer provide the care she needed. When she came to the centre Emily had already given birth to her first litter of kittens, all female.

Now aged four weeks old, the kittens have also taken on literary names. Becky said: “The theme is for mums to be named after the writer but for their kittens to take the names of characters from the books of these authors. So we have Catherine, Eliza, Celine and Isabella.”

A poorly stray was the most recent female to come into care at the centre. With an unknown health record, she is currently housed in an isolation unit. And what better name for a cat with a mysterious backstory; Agatha Christie, of course.

Downham Market Adoption Centre is marking 30 years of caring for Norfolk cats with a summer of fundraising activities and events, building up to a virtual balloon launch on 19 July and online cat show in August.

To find out more about the work of the centre, visit their website at https://www.cats.org.uk/downhammarket

If you would like to welcome a new cat into your home, find moggies in your area at www.cats.org.uk/adopt-a-cat

Story time with cats is an online lockdown sensation