This post has been written by Gabby Choo, whose workplace Digitas nominated Cats Protection’s Central London Branch its charity of the month.

Every month at work we choose a different charity to sponsor so, of course, I put forward Cats Protection. On Fridays we run our own bar, so I banded my work buddies together and got them all to help out selling drinks (when secretly they probably just wanted to relax) with all the profits going to the charity. We also put donation boxes around the building, but I really wanted to spread to word to get people to open up their hearts and their pockets, so rather than sticking up some flyers or sending an email I decided the best way to get people thinking about cats would be to bring some cats into work.

Obviously I couldn't bring in real cats so I did the next best thing, I printed out life-size kitties and hid them around the office, sitting on printers, looking over doors and hiding in toilets. All these cats got people awwwwing and smiling, I discovered that we have a lot of secret cat lovers at work. 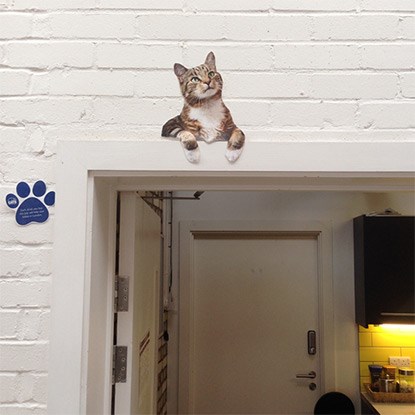 A sneaky cat hiding in the office!

The word was out and people were donating but I thought that we could do more. I was bored of the bake sales we get over and over from month to month and I wanted to do something a bit different. That’s when I decided to make the one-of-a-kind Kitty Kat Cone Cart. Since the sun was shining and summer was upon us what better way to tempt people than ice cream and lollies, delivered right to their desk? 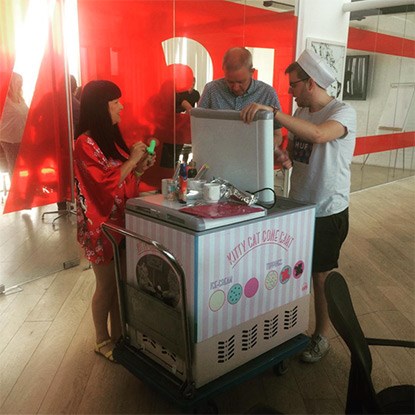 One scoop or two?

I managed to borrow a portable freezer and put it on wheels, so it would just about fit between the desks. With the help of a friend we designed our own bespoke cart. Then a trip to the supermarket to buy vast amounts of ice cream, lollies and toppings – maybe the checkout girl thought I had been through a really bad break up. One rushed taxi back to the office before it all melted and I was ready to go. 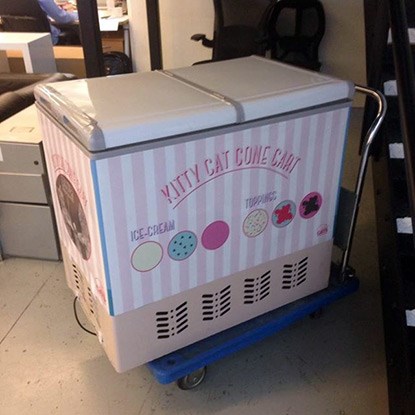 I cajoled some colleagues to help me out running the cart complete with ice cream van music and we took it for a spin. It proved immensely popular! We sold out before we’d made it around the whole building and kept getting requests for it to run again. 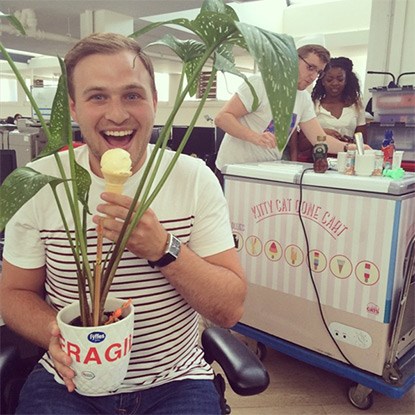 A colleague enjoying his ice cream

In the end for me Cats Protection month was a month that I made a lot of friends, made a lot of ice-creams and by the end of it, when I saw how much we’d raised – just over £500! – I felt like the cat who’d got the (ice) cream too.

Barbara Read, Co-ordinator & Welfare Officer at our Central London Branch says: “Thank you so much for nominating us as Digitas’ charity of the month and for all you did to fundraise for us through this innovative initiative. We really appreciate your hard work and the effort you put in. All the money will go towards helping our cats.” 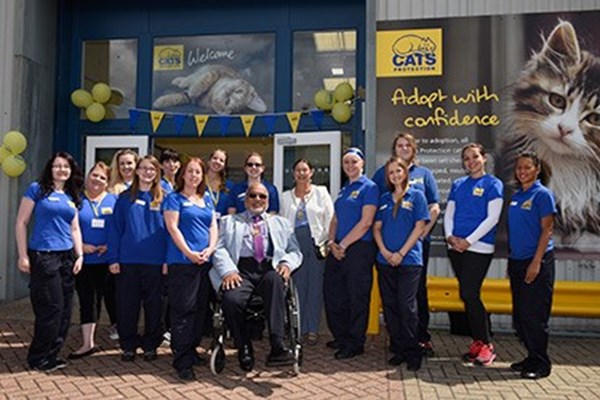 Behind the scenes at our Mitcham Homing Centre opening event

Let's get this show on the road!