Affectionately named Tiny Tim, the vulnerable little kitten is believed to have been around a week old when he was found in a garden in the Cotswolds. 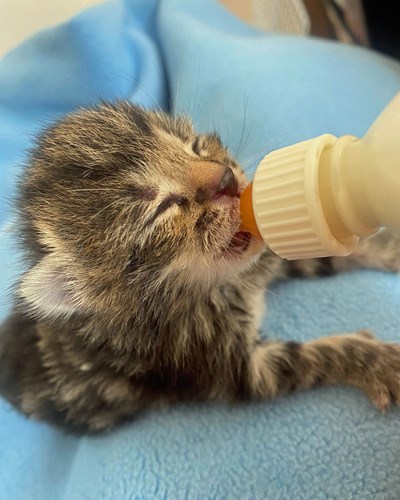 He was spotted on the edge of a hedgerow by gardener Lloyd Houghton as he went about his work in the garden in Chipping Campden.

Realising the kitten needed urgent help, he rushed him to our Evesham Adoption Centre.

“I was working in a customer's garden and heard what I initially thought was bird noises,” said Lloyd. “The noise continued from the same place and out of curiosity I had to go and investigate. 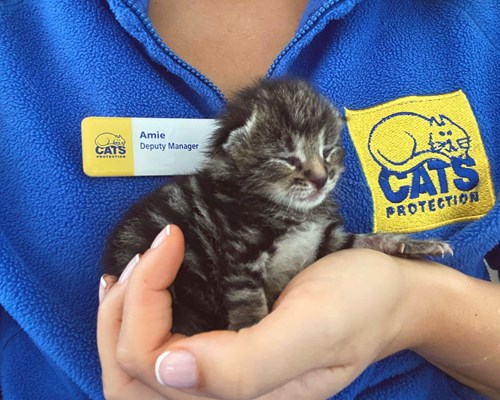 “That was when I found him helpless on the soil and wailing. I could see he was in need of special care as he was far too young to be away from his mother.

"I tried to look for the mother, who I think is a feral cat that roams the gardens but there was no cat or any more kittens to be found. I checked with the neighbours and they knew nothing either, so I popped him in a box and wrapped him in a flannel for warmth before taking him to the adoption centre where they took charge.”

The team at the centre immediately gave the unexpected arrival some kitten milk, warmed him up and placed him in a cosy bed, ready to be cared for round-the-clock. They ensured he also had a teddy bear with a heartbeat so that he felt as though he was with his mum or siblings. 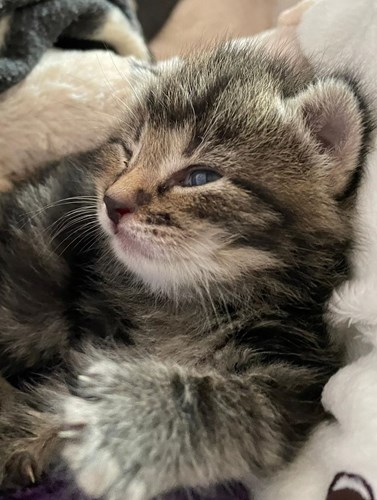 Amie Jones, Deputy Centre Manager, said: “Tiny Tim’s mum did a really good job looking after him – he had no fleas or ticks and was a good weight for his size.

“We have no way of knowing why Tim got abandoned. His mum might have been moving the litter and dropped him or got spooked, but we can only guess.

“We asked around the area where he was found but nobody knew of a mother cat with new kittens, so he was extremely vulnerable and certainly would not have survived much longer if he hadn’t been brought to us. 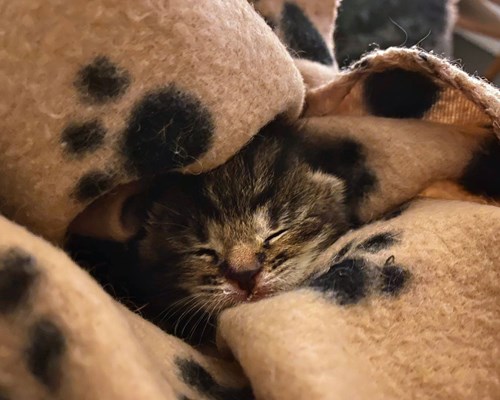 “Because he was so young his eyes weren’t open and his little ears were still folded against his head so he’d only have been able to smell us.

“We had to do everything his mother would have done – keeping him warm, feeding him every two hours initially and toileting him. Then as he's grown we've been teaching him natural cat behaviours and socialising him so that he’s fully prepared for the world around him.”

The centre’s cat care costs, including round-the-clock hand-rearing, are being supported this year by players of People’s Postcode Lottery who have helped 50 cats and kittens like Tim that have come into the centre over the past year.

Tiny Tim’s fosterer Dan Smith adds: “Now he’s coming up for eight weeks old Tim is doing amazingly. He was a strong character right from the start and thankfully he’s stayed that way! 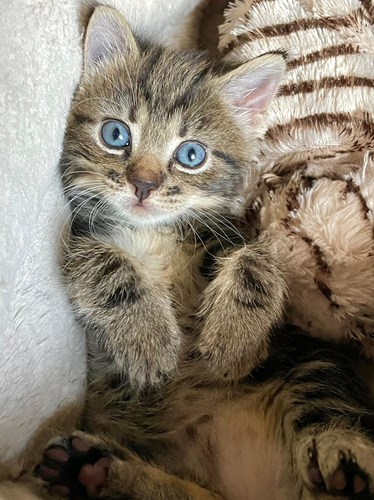 “Now he’s getting a little older I’m really beginning to see a very playful little man, he loves his toys but enjoys playing with me even more. He just adores having people around, perhaps because he’s never known any different.

“Tim was a very good bottle feeder, he had the odd strop as kittens do but overall he’s been a joy to hand-rear. He was quick to wean off his bottle and also amazed me when he started to use his litter tray all on his own – a real breakthrough! He is a bright little spark and full of beans who will make a great pet for a very lucky family!”

Once Tiny Tim is nine weeks old he will be ready to find a new home. If you are interested in adopting him, look out for more details on the Evesham Adoption Centre’s website and Facebook page.

You can also find cats looking for new homes in your area using our Find-a-cat tool.